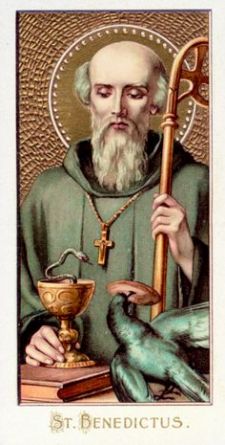 The magnitude of Benedict’s significance in church history is not matched, unfortunately,

by the knowledge of his life. About forty years after his death (and the year of his death is not known), Pope Gregory I wrote a series of dialogues on noteworthy Christians of previous times; his account of Benedict contains almost all the solid biographical information we have.

He was born in about the year 480 in Nursia in north Umbria in Italy, along with his twin sister St. Scholastica. Benedict was the son of a Roman noble of Nursia. He was educated at Rome, where he was repelled by the vices of the city and in about the year 500, he abandoned the city and fled to the mountainous town of Subiaco, some forty miles away. He seems to have been about nineteen to twenty years of age.

On his way there, he met a monk named Romanus, whose monastery was on a mountain overhanging a cave. The wise monk discussed with Benedict the purpose which had brought him to Subiaco and gave him the monk’s habit. By his advice, Benedict became a hermit and lived for three years, unknown to men, in this cave above a lake. Romanus served Benedict in every way he could. The monk apparently visited him frequently and on fixed days brought him food.

During these years of solitude, Benedict matured in mind and character and in his knowledge of himself and his fellow man. Despite his desire for solitude, his holiness, austerities and spiritual insight became well-known. He secured the respect of those in the area, so much so that upon the death of the abbot of a monastery in the neighborhood, the community at Vicovaro came to him and begged him to be their abbot. Benedict consented.

But the monks came to resent Benedict’s attempts to reform the monastery along with his strict rule of life and the monks tried to poison him and he returned to his cave at Subiaco. The legend goes that they first tried to poison his drink. He prayed a blessing over the cup and the cup shattered. They then tried to poison his bread. When he prayed a blessing over the bread, a raven swept in and snatched the bread away. This is why Benedict is sometimes portrayed with a raven. From this time forward, the miracles seem to have become quite frequent and many people, attracted by his sanctity and character, came to Subiaco to be under his guidance and Subiaco became a center of spirituality and learning. For them, he built in the valley twelve monasteries, in each of them he placed a superior with twelve monks.

In 525, he moved south to Monte Cassino where he destroyed a pagan temple to Apollo on its crest, brought the neighboring people back to Christianity and in about 530 he started to build the monastery that was to be the birthplace of Western monasticism. The monastery exists to this day, sitting on a hilltop between Rome and Naples. He remained the father or abbot of all the monasteries he founded. Soon disciples again flocked to him as his reputation for holiness, wisdom and miracles spread far and wide. Benedict organized the monks at Monte Cassino into a single monastic community. It was most likely after the arrival at Monte Cassino and as part of the effort to reform the general practice of monasticism that Benedict composed his regula  or Rule prescribing common sense, a life of moderate asceticism, prayer, study and work, and community life under one superior known as an abbot or father. It stressed obedience, stability, zeal and had the Divine Office as the center of monastic life. It was to influence spiritual and monastic life in the West for centuries to come.

This famous Rule soon won nearly universal approval as providing shape for monasticism in the West. Benedict’s Rule was also read with appreciation in the East. It became the norm for tens of thousands of new monastic communities in Europe and it served as an inspiration for the slightly altered ideals that created the Mendicant Orders (or “friars”) in the twelfth and thirteenth centuries. “Never in the recorded history of Christianity has a person whose own life remains so obscure,’ writes historian Mark Noll, ‘done a deed with greater public consequences.”  While ruling his monks, most of whom including Benedict, were not ordained, he counseled rulers and popes and ministered to the poor and destitute around him.

Benedict died of a high fever at Monte Cassino at its magnificent abbey, while standing in prayer to God. According to tradition, this occurred on March 21, 543 or 547. But due to the observance of Lent, he is commemorated on July 11, including in the Anglican Church.  He was buried with his sister in the same grave.

He is the patron saint of Europe, students, monks, against poison, farmers, cave explorers and many more. It is quite an impressive list and it shows how influential St. Benedict is. In fact, the early Middle Ages have been called “the Benedictine centuries.” Benedict lived at the end of the classical age when Roman civilization had been overrun by barbarian hordes. It was the Benedictines who, in the words of Pope Paul VI, “brought Christian culture to the peoples scattered from the Mediterranean to Scandinavia, from Ireland to Poland.” During the Dark Ages, Benedictines taught people how to read and write, to cultivate the soil, to develop crafts and the arts, and to pray. In short, Benedict helped bring about stability during a very unstable time period.

In April 2008, Pope Benedict XVI discussed the influence St. Benedict had on Western Europe. The pope emeritus said that “with his life and work St. Benedict exercised a fundamental influence on the development of European civilization and culture” and helped Europe to emerge from the “dark night of history” that followed the fall of the Roman Empire. Benedict of named the patron protector of Europe by Pope Paul VI in 1964. In 1980, Pope John Paul II declared him co-patron of Europe, together with Saints Cyril and Methodius. To this day, The Rule of St. Benedict is the most common and influential Rule used by monasteries and monks, more than 1400 years after its writing.

Our future depends on a good understanding of the past. I invite you to take a walk in the cloister with me as we learn about what has gone before. For by learning from those who have gone before, we can help ensure a better future for us and those who will come after us.