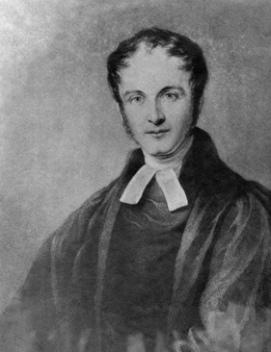 The hymn, “Abide With Me,” is one of the most popular English hymns of the past 150 years. Its author, Henry Francis Lyte (1793-1847), was an Anglican priest and the vicar of All Saints in Brixham, England, a small fishing village on the coast of Devonshire. Lyte was a published poet and an accomplished hymn-writer who also penned “Praise, My Soul, the King of Heaven.” For most of his life, he suffered from poor health and would regularly travel abroad for relief, as was the tradition of that day. Despite his compromised health, Lyte was a tireless minister and a devoted family man. He would often playfully comment that “It was better to wear out than to rust out.”

In 1844, he was diagnosed with tuberculosis. For the next three years, his health deteriorated. On September 4, 1847, he stood in the pulpit for the final time and delivered his farewell message to his parishioners, preaching on the meaning of the Eucharist. It was out of this context that this beloved hymn came out of.

For that same afternoon, Lyte, after a walk on the beach, retired to his room. He emerged an hour later with a handwritten copy of “Abide With Me.” He then left for a voyage to Italy in order to get away from the cold damp coastal weather. While en route, he mailed a revised copy of the hymn to his wife, Anne. A few days later, on November 20, 1847, while resting in a hotel on the French Riviera, Father Lyte went home to be with the Lord. A fellow clergyman who with him during his final hours reported that his final words were “Peace! Joy!”

The hymn is essentially a prayer for God to remain with the speaker throughout his life, trials, and death. The opening line alludes to Luke 24:29, “Abide with us, for it is toward evening, and the day is far spent.”

The hymn has been popular across many Christian denominations and was said to be a favorite of King George V and Mahatma Ghandi. It is often sung at Christian funerals. In the aftermath of the Titanic sinking, survivors reported that the ship’s band played the hymn while the ship was sinking. It was also sung at the weddings of King George VI and Queen Elizabeth II. It is sung before kickoff at every FA Cup Final and Rugby League, and at various annual celebrations in Australia, New Zealand, Canada, and the United Kingdom, including Remembrance Day (what we call Veterans’ Day). It has also been recorded by various jazz and gospel music artists. The hymn has also been a part of the soundtrack in numerous films and television programs including “Shane,” “Doc Martin” and “Touched By an Angel.” It was also sung at the opening ceremony of the 2012 London games.

One scholar has commented, “As He often does, God took the sad ending of a life and made something lasting and beautiful.” May this also be our constant prayer-that the Lord would indeed abide with us throughout our lives and also at our death. Amen.

3 thoughts on “Abide With Me: The Story Behind the Beloved Hymn”

Our future depends on a good understanding of the past. I invite you to take a walk in the cloister with me as we learn about what has gone before. For by learning from those who have gone before, we can help ensure a better future for us and those who will come after us.